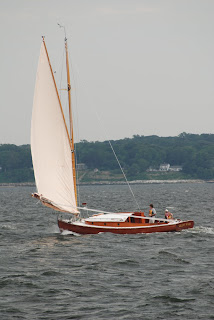 The East River is always exciting, that big current keeps the navigator on his toes and the sights of the city are always spectacular, especially the bridges. There is spectacular bridge engineering all around the boroughs and we got to see most of it. We had a distraction with determining why the bilge pump was cycling through much of the transit. John got the task of tracking the cause while Wendy steered and I navigated. It turned out that a leak had developed where the keel meets the transom, noticeable only when motoring. That activity pulls the lower part of the transom into the water. Apparently the transom knee swelling had opened the joint slightly and we were flushing out the bilges. Once clear of the east we slowed down and I was able to temporarily caulk the joint from the inside using some heavy string and a screwdriver. That being done Wendy took a break from the helm to prepare yet another fantastic lunch before we set sail for Cold Spring Harbor.

We started with two reefs headed downwind and broke 8 knots surfing down the waves. Some weather was coming in over the Northern shore of Long Island Sound and it wasn't too long before another reef was needed. Not long after that one the decision was made to round up, take sail and motor into Cold Spring Harbor.
We had met up with Barnegat in the east and rafted alongside her, we thought for the night. The wind went to Northwest and came up some causing the boats to jump around considerably. In the end we moved Silent Maid from alongside to trailing behind but there are a rub and toe rail repair to effect for that little adventure.
Barnegat has a rib with her and we used this to go around to Oyster Bay for a very nice dinner. We also dropped off Wendy and picked up Pete in the process.

As I write this at 10 am we are reaching near Bridgeport bound for Mystic. The breeze is northwest at 10, we have the full sail set and are making six knots. Life is good.
Posted by John Brady at 6:55 AM