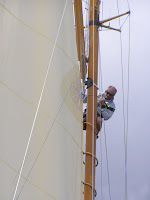 When the first race of the season is nigh the real race is always having the boat ready. There are stories and legends describing this flurry of semi frantic activity. There are those who say it doesn't have to be that way and such occurrences are the product of a dysfunctional childhood, or something, and there are those who maintain the world of human affairs would grind to a halt without deadlines. Who knows?  For us boat workers the real race is always just before the race. 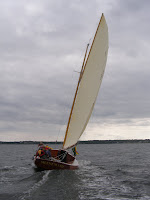 Last winter Silent Maid's rig was studied closely and changes were made to optimize it. The big change in terms of sail shape was to exchange the gaff jaws for a bridle and peak the sail much higher. Mark Beaton built the new sail and chose a lighter cloth than the earlier one as well. This sail was also designed to fit the spars a little more closely. The sail arrived in the morning on race day and work began immediately bending it on. There was a moment of dread when the fabric appeared longer than the gaff but we pushed ahead, finished bending it and hoisted. It turned out the fit could be made perfect by moving the throat grommet. In the meantime a line around the mast at the throat would serve and the sail set beautifully. It is a magnificent piece of work.
Henry Colie had spent much of the previous evening going over the running rig, replacing lines, tightening the gaff bridle and throat halyard strops among other things. We now sent him up the mast as the boat drifted along in light air. He got the throat adjusted perfectly and we were as race ready as we could be. We had a young crew aboard. Peter, the owner had flown in and was aboard. The electronics that tell more than you can digest about wind and current were up and running. There was a glitch with the radio. The start was postponed several times as the fleet bobbled waiting for wind. No one seemed to know how the rating rule worked, the tactical guys would just mumble about speed and distance but it seemed clear that boats from thirty years later were being deemed fair competition for the Maid. The end result is we had a great time racing, we even passed a couple boats downwind but we have no idea how we really did. The ability to go to weather has steadily improved over the years, that much was apparent. Today we go do it again, hopefully without the first race deadline drill though.
Posted by John Brady at 4:48 AM