We would sometimes like our life to be about getting one boat done, focus and all that, but it is not just about Silent Maid. Maybe it should be considering she will be back in the water the week after next but there are other things going on in the shop as well. Like launching the sharpie skiff, Fish Stix. This boat has been built by teenagers and volunteers over the past couple years. She is almost done, her hull was done enough to float and she was very much in the way, so she was rather unceremoniously slid into the river. She had hardly begun to swell when another boat, the TSCA tuck up, Marion Brewington, occupied her spot aft of Silent Maid. Wendy had hardly got paint on the tuck ups deck when her old spot was taken by Silent Maid's spars. Yes we are constantly redecorating the shop, constantly coming up with new maritime motifs. 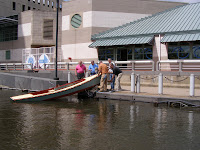 The spars are down for varnish, new spreaders, lots of wiring for an assortment of lights, antennas and gauges.  Right after Maid is in the mast will be stepped so we need to get these things done. The gaff and boom will be fitted with sail track and the gaff with a new saddle as soon as it arrives from Port  Townsend.  Will we ever deal with a foundry that sends stuff early? That seems as likely as a boat builder or sail maker delivering their handiwork early. Hell might not be frozen over on that day but it will have attained a nice cozy temperature.  Maid will be a motorboat right after launch so the gaff and boom can be dealt with a little later.  Please don't breath a word of this to any foundryman or sail maker, tell them we need the gaff and boom last week.
Posted by John Brady at 6:31 PM