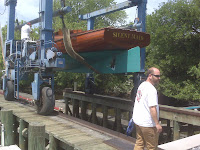 The amount of time between posts is a good indicator of how hectic things have been and how tired this would be writer has been. Silent Maid went in the water yesterday after a few misadventures involving wide load permits or the lack of them. She only leaked a little bit and after the rig was assembled, the mast stepped and the engine oil changed we were able to get underway as a motor boat. All of that happened in Riverside, NJ. We even had the last of the ebb tide to help carry us back down to Philadelphia where the boat is tied up outside the shop. All of this happened with the temperature in the mid 80's and we were all downing ice tea , slathering on sun block, missing the climate controlled shop and eager to get the summer properly underway. 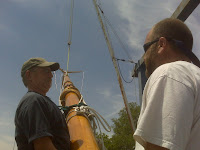 Of course there are still a billion things to do between now and setting out for Bay Head, NJ next Wednesday. The handrails on the cabin, the head , GPS and refrigerator to hook up, the new gaff saddle to be riveted to the gaff, the sail to bend on, charts, books and a compass to pick up and on and on and on. Among those things is getting the on board computer operational so I can continue this blog from the boat. It is to be hoped the posts will become more consistent as we settle into the routine of a coasting voyage. A coasting voyage in a 1920's era catboat! How about that? Starting in just four days!
Posted by John Brady at 3:25 PM