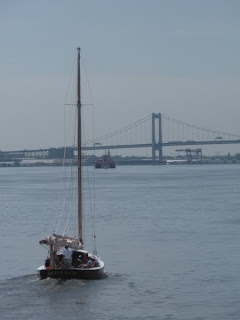 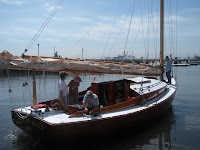 So far this trip has been about working through the details on the boat as we sail her as much as possible and enjoy spectacular hospitality in each place we visit. We started out with a mad scramble to get as many pieces as possible on the boat before getting underway at a reasonable hour. The gaff is on, the sail in place, but not seized to the hoops, the cabin is crammed with stuff. It promises to be a hot windless motor boat ride down the Delaware and the crew will spend it organizing stuff; getting the refrigeration up and running and completing the task of bending on sail. By the time we were off the mouth of the Cohansey we set sail for the first time and reaching from the shipping channel to the mouth of that tributary. Joan and Charles Bernstein get off at Greenwich after a very full day.  Wendy, Pete, John and I are whisked away from a plague of gnats to a civilized evening with the Thompson family in nearby Roadstown. We were thankful for the box fan Jeff had the foresight to leave on the boat and the mosquito netting when we returned to the boat.  If you ever get the chance visit the town of Greenwich on the banks of the Cohansey. It is a real gem with houses dating back to the 17th century. 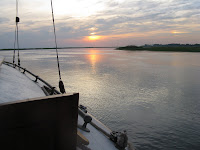 After purchasing any number of missing items at the yard store we set off for Cape May. The day was cooler and when the breeze came in it was fair. We played with hoisting the sail with the electric winches and after a little while we tucked in a reef with their assistance. Truth be told they were a little scary for hoisting. Hard to watch the sail and the winch at the same time and there is a great risk of some unintended line getting caught in the works. There is a need for great care and when there are a sufficient number of crew it seems hardly worth it. But for taking in a reef they are a pure joy. Simple, easy, fast. The breeze built a bit as the day progressed and if we had carried sail longer a second reef would have been in order. But instead we round up to take sail and motor through the Cape May canal. It was time to enjoy another great night of hospitality with the Pritchard family and friends. Seafood, sea stories not necesariily mentioning the sea and learning about primitive tool making from the Pritchard boys was very entertaining. But over the protests of our hosts we slept on the boat once again 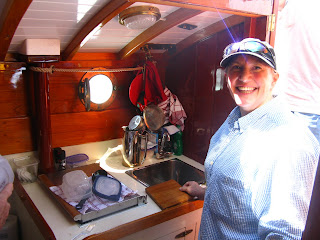 and got off to an 6:30 start bound for any point well past the tawdry excesses of Atlantic City. We started out with an easterly breeze and promises from the weather liars that it would move to the south east. It turned out they were right and not liars this time so we had some good sailing. Not good for Wendy though who experience some mal de mere. Not enough to prevent her from serving up yet another great lunch, showing the mettle of a truly great sea cook. We had a little motor sailing in the afternoon but turned it off to run into Absecon inlet dead downwind. There was a lot left in the day and we started sailing the narrow channels between the sedges determined to reach Little Egg Harbor before night fall.
We did this despite a brief encounter with the bottom of the bay. Silent Maid is a heavy boat to be pushing around while wading; I can attest to that. The bottom was hard sand and not mud thank heaven  and the Coyles and Greenwoods were awaiting us at the little Egg Harbor Yacht Club.  On this evening we would not sleep aboard or get started nearly so early. It is always worth arising early to avoid a fleecing in Atlantic City. You might get the impression I'm a little opinionated about the place, it did have a beautiful skyline once and might again in the distant future. 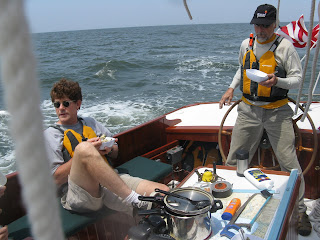 We had a fair breeze all the way up the Barnegat Bay and took full advantage of it. Several miles of channel is in the back yards of the houses on Long beach island and the locals enjoying a leisurely Memorial Day weekend Saturday  breakfast came running out of their houses with a camera in hand to record Silent Maid's passing. Hopefully we will get to see one or two of those images before too long.
The day had started rainy as we ate a great breakfast at the Greenwood residence but got progresively better as we sailed along. By late morning we were in the Barnegat bay with a single reef tucked in and by lunch we were jogging up the Toms River eating our lunch. When that was over we sailed by the Island Heights Yacht Club to show off for whoever happened to be around then furled sail to stop at a marina for fuel, a pump out and Klondike bars.  Island Heights is the town Edwin Schoettle, the original Silent Maid's original owner called home in the summer so a brief nod in that direction was in order before heading north. A drive by of de Rouville's Boat Shop was also in order; they had done much to help us with  Maid in the previous season.  We motored through the Mathis bridge, which opened promptly, then set sail once more for a sleigh ride up to Mantoloking.
Posted by John Brady at 6:40 PM