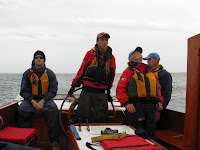 We were set to race. It was a distance race with some wind expected so the boat was in cruising mode really. The heavy sail was bent on and the crew was aboard transferring equipment and supplies from tender to cat boat.  Some had traveled a good distance to be with us. Others had worked hard to make sure we had the food and gear we needed. There was every reason to sail and not a few reasons not to. The weather forecasts kept worsening.  Gusts of 25 went to 30 then 35 and even 40. Visibility kept plummeting in forecasts that included torrential rains and patchy fog illuminated by lightening. The wind was from a favorable direction but was bringing waves of increasing magnitude. We were on a calm bay with a perfect little breeze, thinking about going sailing and really wanting to. 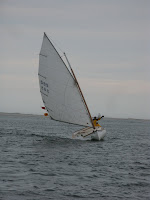 This was a chance to even the score with Kathleen. Our boat would be faster in a good wind we were sure and we needed a win.  Yet every report was worse than the last. Thing is they are the reports of the weather liars and need to be taken with a bucket of salt. But the closer the forecast the more accurate it tends to be.  It was my decision and I stayed on the fence as long as I could. I really wanted to go and I am so glad I didn’t.  We did go sailing. Why not? The crew was aboard, the boat was ready and the wind was perfect. We got underway for the inlet.
We motored over to Kathleen to let them know we would not be racing. Tim was determined to go and wondered what would convince me. Maybe I’ve read one sea story to many. All the good ones involving big adventures start with a crew new to the boat, a falling glass, and a determination to push on. Frequently this determination is fueled by some deadline related to a distant job, a sense of optimism, and a healthy or unhealthy skepticism when it comes to weather forecasting. We would sail to the ocean’s edge and see them negotiate their way through the breakers; that was all. But you know I could always change my mind when the time came to head back to a known friendly mooring.  I had gotten off the fence but could still climb back on. The crew of Kathleen were tying in a pair of reefs before setting off from their mooring. We motored up wind, set the full sail then winched in a pair of reefs. It was good for the new crew to see how this went. It wasn’t too long before we shook one of them out. We had the people to hold her down and no need to conserve energy. We had fun negotiating the sand bars under sail. The local boys on the crew know their waters well and we all had a good time tacking through the shoals working the sail and the centerboard.  It was a while before Kathleen was ready to go so we circled back to meet her once the breakers were in sight. 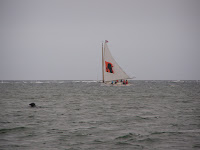 A couple years back a new inlet opened into Pleasant Bay and changed the character of the place markedly. The current is swifter now and the sandy shoals move around. In general the bay is a healthier place with clean water, thick eel grass and abundant sea life.  Because of this the local seal colony has grown markedly and great white sharks have moved in to hunt. This aspect of the new clean bay, and the houses removed by the new inlet, has some of the locals a little put out but for us outsiders a seal colony of that size on a sand bar was something to see.  No sharks to report his trip though.
Kathleen was working her way through the shoals as we ran down to meet her. Not racing, she had elected to tow her dinghy. We ran past her rounded up around the dinghy and sailed with her for a bit. We had no dinghy and one less reef so we passed her. Another small cat boat had sailed out to see her off and the three of us comprised a small parade. Once we neared the last spit of sand we came about to head back into the shelter of the bay. Just as she approached he breakers Kathleen’s crew broke out a large orange and black flag bearing the logo of Silent Maid.  I stuck with my decision and am writing this in a warm dry cabin as the rain beats down on the roof and gusts of wind cause the boat to sashay around her mooring. Schubert is on the stereo and life is good.  We will set out for Bristol in a day or so when things settle down a little but with the breeze still favoring I hope.


Photos by Pete Byar and John Brady
Posted by John Brady at 8:18 PM