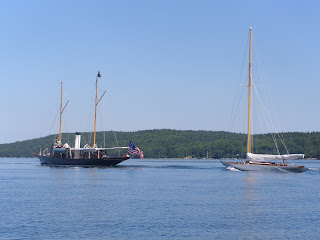 If you like wooden boats the Eggomoggin Reach Regatta is required viewing. The two feeder races add to the build up as the size of the fleet increases with each one. This year's main event attracted 92 boats, all of them gorgeous. This is not including the tenders, often wooden power boats of some size. The hands down winner of the tender category in terms of flat out cool and  classically beautiful, though steel hulled, was the steam yacht, Congarda.


The boats are all yachts, schooners and sloops but only one cat boat. Some carry spinnakers with all the thrills and spills they can bring and some do not. It is a who's who of classic yacht design out there both in terms of design and building, contemporary and from a bygone era. It was a privilege to be in such company I can tell you and doubly so because we were in a small boat that turned heads and did well on the race course. Silent Maid did herself proud, winning her class in all three races. The plan was for the larger boats and the spinnaker boats to start later so they  would sail through the fleet of smaller vessels. Only a few of the biggest sailed by the Maid I am glad to say and those went thundering by, a pantheon of storied big racers, Ticonderoga, Black Watch, Marilee. It was grand thing to see. 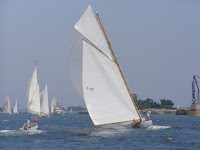 The second two races could have been designed so the Silent Maid would do well. Lots of reaching and with her big crew aboard to hold her down Silent Maid reaches right along. In the second race Christian and I manned the tender, Barnegat. She is a 50' wood boat built in 1962 by Stonington boat and designed by Henry Scheel. A displacement vessel with a big rib to tow behind she has a top end of 8 kts. Unknown to us Maid's lunches were left aboard, so while we seized the opportunity to grab a shower before getting under way the fleet was off and running. Silent Maid's crew had very mixed feelings about how long it took us to catch them, even with the engines revving a bit more than they should. We motored through a very large fleet before reaching that hungry fast group.On the way we had the best views in contemporary yachting, no question about it. 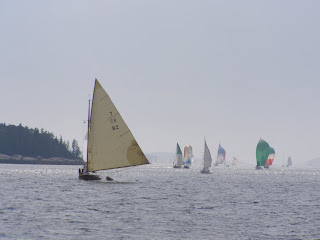 The weather for these two races was crystal, a mild cold front having swept the skies clean. The breeze was perfect, the photo ops numerous. I'm sure there are websites packed with good pictures of this one. At night the milky way was visible and the harbor was decorated with anchor lights seemingly suspended between sea and sky. Brooklin, Maine has numerous boat builders and a great magazine but a metropolis it is not. It is a blink and you'll miss it sort of place. This means no light pollution which means a sailor can remain aware of his small  but precious place in the universe here. It is a great place to have a regatta.
Posted by John Brady at 9:34 AM