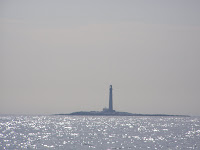 It took four long days to get from South Dartmouth to Castine, Maine. On the first two we sailed as much as we could, the prevailing breezes being with us, but by the afternoon of the third day it was apparent we would have to put the pedal to the metal if we expected to race in Maine. We motor sailed down wind, maintaining 7.5 knots in some lumpy seas along the Maine coast. This rock strewn coast dotted with light houses and covered with pine trees is beautiful and we were very glad to have the visibility as Silent Maid rather noisily surfed by rocks and trees. The first night we made Boston and anchored in Hull bay. The second saw us on a mooring in Kittery and the third in the Sheepscot River. Each morning found us up with the sun and each evening we were seeking a mooring in the waning light. When the afternoon breeze came in it was behind us so we had good sailing until the decision to switch on the motor had to be made. 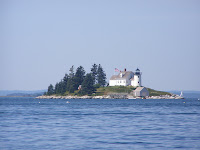 As we made our easting the shoreline the sandy features of the Cape Cod area gave way to more and more rocks. These all had surf at their edges but were capped in a variety of ways, some had wild life, sea birds or seals, some had pine trees and some had structures. The best structures were lighthouses of course and the worst were mediocre examples of modern home building. It is difficult for architecture to improve on the pine tree. The light houses succeeded mostly because they left the trees alone for the most part. All in all the structures that let the surrounding environment envelop them were the best. That takes a little time so my judgment of the modern structures may be a little unfair. 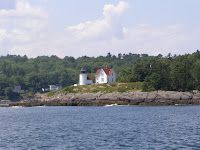 We arrived in Castine around five with a steering quadrant that needed another repair but a crew that was in pretty good shape. The gear teeth on the quadrant are cast in three segments and attached to the quadrant itself with studs. These had been lightly peened to keep them in place. Too lightly. Pete was steering and reported a hard spot in the steering and a clunking sound. I went to check and found one of the segments in the bilge. I was able to stick it back on and wrap a string around it to hold it in place. We 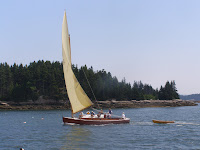 arrived a day early to see what resources were available in Castine. The problem was we were arriving just as all shops are closing for the day. There was some thought of getting the quadrant to a machinist or welder first thing in the morning but that seemed destined to fail. We needed a repair that could be done on the boat that night. I came up with a plan to lightly countersink the quadrant and head over the studs. Pete got the task of locating tools while I started disassembling the gear. At this point Sandy arrived and offered to help. He almost immediately produced a wrench set then set about locating welding shops as a backup. Pete located a person at the yacht club with a home shop where he was able to borrow the necessary tools. John found a fish and chips place with carry out. Christian assisted in this. We were swatting mosquitoes and banging away at that quadrant by flashlight until about 9:30. No one complained. We might not have listened anyway. By 10:30 the steering gear was reassembled and we were ready to race. That’s a helluva way to finish a cruise. We did have that classic moment when I got to hand the helmsman a piece of the steering gear though.
Posted by John Brady at 5:02 PM