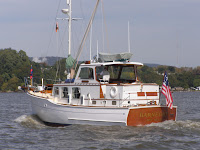 Around ten years ago it was my good fortune to take the powerboat Barnegat from Kingston, New York to Montreal. Since then I have always wanted to see the Hudson River from New York City to Kingston and this week I have finally got to do it. That first trip was at this time of year and Barnegat is accompanying us on this trip;  even though I am on a different boat and a number of years have passed there is a continuity. There you go. 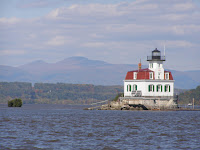 The excuse for this trip is to participate in a New York Yacht Club Cruise. That is an experience in itself. Most of the participants are largish power boats that are or appear to be made by Hinkley, the maritime equivalent of a Beamer. Each day has ended with cocktails and dinner some place where I would not normally or abnormally picture myself having either. Whenever possible one should do this sort of thing. Because there is no racing these events are very different in character than the sailing events we have been participating in all summer. 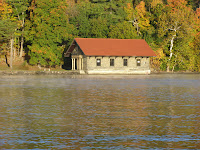 The River is fascinating  as we transition from the modern city environment to the inspiration for a whole school of landscape painters and back again. As American rivers go this one is steeped in history; mansions,West Point, stuff named after Rip Van Winkle, this neighborhood has it all. Not much sailing though, the motor has been on more than off, but we are sailing downwind now on the return journey, as we approach West Point. The fall color is just getting started here, the weather is crisp, cold nights and fully covered days. Our sunblock consumption has plummeted. 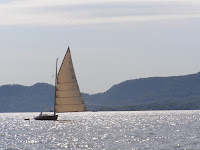 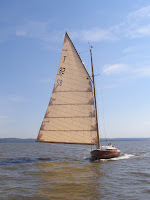 The Hudson has kinetic scenery as befits the major conduit into New York City. Trains are a constant presence on the river banks, freights run along the western bank and passenger along the eastern. Trains have been with us for long enough that they fit the landscape. Thank the transportation gods that a major highway wasn't carved into the cliffs as well. Rivers have always been about human commerce and even as water born transport fades they often provide the easiest path for rails and roads. The rails are here to remind us how the mansions got built and who bought those remarkable landscape paintings. The earlier flow of commerce on the water still exists, Silent Maid maneuvered some tight bends in the company of barges and ships, and there are remnants of the earlier canal traffic. We went a little out of our way to pass close by the Hudson River Sloop, Clearwater, a replica of a vessel used to transport goods from the end of the Erie canal to the city which now works hard to promote a clean waterway, and there are a few older vessels along the banks testifying to the busy commerce of long ago. As the city drew nearer the traffic increased until we were surrounded by iron behemoths who would barely register crushing our little wooden boat. No questions about right of way here.
Posted by John Brady at 11:35 AM