The end of our trip down the Hudson was in rain with predictions of winds in the 40's for the following days. Silent Maid would rest in Jersey City while her crew waited on the weather from the comforts of home. It was worth the wait as we sailed from Jersey City to the Manasquan Inlet on a single tack with the wind out of the Northwest fluctuating between 8 and 12 knots. The sea was as flat as a lake as we sailed along the beach, three days of offshore breeze will do that. We had the current running out of New York then into the Manasquan Inlet, it was truly a perfect day for this particular trip and a great way to end a five month cruise. 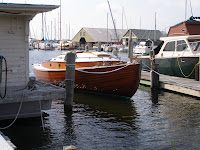 We short tacked between the inlet jetties knowing Suzanne Beaton would be taking pictures then took the sail before reaching the railroad bridge. Between the bridges we picked up the Beatons and Wendy for the run down to Mantoloking. It was motor boating and bridges until we reached the Bay Head Yacht club and set the sail for one last time. Bay Head is the town on the transom but we were headed one more south to David Beaton and Sons in Mantoloking where Silent Maid would be wintering.
And that's it. The sea bag is home, the food has been cleaned out of the galley, the rig is out and soon the boat will be in a shed. But not quite, not so fast, there is still the original Silent Maid back in Philadelphia. 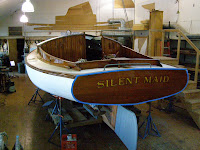 She is looking pretty good with fresh paint and varnish all around. The multitude of repairs are hidden under that paint and she looks good enough to float though she surely is not. The discerning eye would have no trouble spotting her hog though most wouldn't see it. She is nearly ready to move out of the shop, either to display or to warehouse. I am strongly for display not just because that boat was the beginning of a remarkable adventure for me but because she has had a profound effect on all those who crossed her wake. We were reminded of that everywhere we went and can only hope the new Silent Maid has a similar impact. 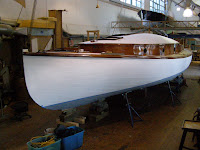