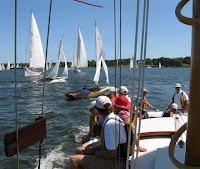 I have been in Philadelphia almost a week now. The idea had been to haul Silent Maid, get her cleaned out, leave a work list with the folks in Portsmouth, and go home for a few days. That was last Monday, I was to return on Thursday to get set for the Museum of Yachting Regatta this weekend. Hurricane Earl put the cabash on all that. The Weather Liars had the storm set to track right over Cape Cod right up until it didn't. Given the forecast the smart thing was to leave the boat on the hard until the danger was past. The truth of the matter is I really needed to spend time at work and at home so what may or may not have been smart from a weather standpoint worked  well for living.  The to do lists in both places are stupendous. That could be the subject of another blog, or two.  Unfortunately the race Rock Regatta was cancelled as well so Silent Maid won't be in motion again for another week when she sets sail for Greenwich, CT.

Any person's perspective of a sail boat race varies according to the boat he is on and the job he is doing on that boat. In the last two races with Kathleen I had two very different jobs, being in charge of keeping the boat fast in the first and skipper in the second. The first job means keeping the sail properly tuned at all times with the sheet trimmer making the call on halyard and outhaul tensions and if the need arises putting a reef in. The job also calls for making sure the crew weight is properly distributed at all times. This is a dynamic activity because the weight needs to be shifted with the wind conditions and point of sail and because people have a tendency to wander. No one wants to sit where they are supposed to, that is human nature. So my perspective on the first race is about those things more than about how the start went or the bigger tactical picture, which is not to say I don't have observations and opinions on these matters, they just may not be well informed.

We did get a good start  in the middle of the line with Kathleen to windward. We were too slow sheeting in  but otherwise fine. It seems Bristol Harbor has its own wind pattern with a pretty good breeze blowing while the Narraganset River itself is pretty flat. This would impact racing both days. We had a fading Northwester but at the start Silent Maid's crew was confident we would get the wind she likes. The boats emerged from the harbor side by side and as soon as she could Kathleen drifted off to weather. Silent Maid did not cover, favoring a more direct route to the mark.  The breeze faded then filled from the right favoring Kathleen. who reached the downwind down tide mark first then had to anchor to avoid being swept down river. Silent Maid also anchored and the two boats waited for a breath strong enough to overpower the current.
When it came Kathleen favored the shore and a weaker ebb tide while Silent Maid hoped to find shelter from the current below the island that divides the entrance to Bristol. Kathleen was right and won on a shortened course. 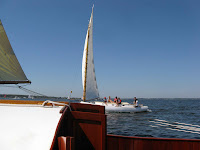 The next day found me in the skippers spot with a great determination to cover my opponent whenever possible.  This time I know the thinking that went into our start and the windward leg up the harbor. We liked the committee boat end of the line and the right side of the course through a mooring field.  We being myself and yesterday's skipper, Tom Emlen, who would call tactics. We started in the second tier and tacked onto port in clear air. The rest of the fleet liked the committee boat and the left side of the course,  a cause of some trepidation as the fleet isn't often wrong, but we were committed to the mooring field. At the top mark we were coming in on starboard below the layline, fortunately the boat above us had to tack as well and we had just enough room to put in a short jog on port then round on starboard. All the boats that had gone left were on port tack and there promised to be a fine mess behind us at the mark. We had picked the favored side of the course after all. Kathleen was in the middle of that, wound up touching the mark, and doing a penalty turn.

Once again there was plenty of wind in the harbor and none outside it so it was with some dismay that we watched Kathleen make up all that lost ground as we drifted over to cover her. This race was from Bristol to Newport, largely downwind, and the two boats spent a good deal of time together. When the wind was above 5 knots or so Silent Maid surged ahead and when it fell below that Kathleen took the lead. Finally Silent Maid recognized a wind shift a bit before Kathleen and moved ahead. The wind had gone further east a little forward of the beam and the crew shifted from windward to leeward as the sheet was slowly gathered. Kathleen was clearly behind now and appeared to favor the shore of ....Island while Silent Maid endeavored to stay between her and the Newport bridge, the next "mark" on our course.  We consulted Eldridge to see which side of the island the tide favored and it was ours. We were surprised when it became apparent that Kathleen was heading for the eastern side of the island rather than edging towards its western shore. By the time we realized her plan it was too late to cover, she was up current after all. We double checked the current charts and resolved to see what happened on the other side. I think she was gambling that a breeze would come in from the east and she would be positioned to catch it first. By this time we all knew our best source of local knowledge was Kathleen's skipper so as we watched for signs of our competitor with some concern as we neared the end of the Island. 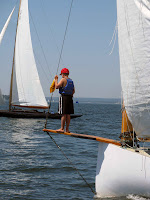 Light air sailing is a test of focus and nerves. The weather was hot and sitting in one spot is boring. Almost every crew member can think of something better to do in some other part of the boat. There is always a camera or a drink to be fetched.  Weight placement is critical on a light displacement boat. It is easy to start looking at the other boats more than subtleties of seemingly non existent wind. This is especially true when the fleet is as good looking as this one. Silent Maid with her big sail and light displacement had passed a good many much larger boats but these were only decorations on the race course, we only cared about finishing ahead of one other boat. All that should matter is how to most efficiently drift from wind patch to wind patch but the human mind isn't designed to operate that slowly and so misses things that make all the difference. That nondescript island helped us. It had a scrubby growth and a few abandoned structures, probably from Newport's days as a major naval base. but the fact that our competitor was hidden behind hit helped us stay focused on the task. When would she emerge from behind those trees. Would she have made up ground or lost it?

We emerged a bit further ahead and Kathleen still favored the far eastern side of the course. The sea breeze did come in as we approached the Newport harbor entrance , we could see a light mist over the water and smell the ocean as it filled in more from the south. Kathleen had won the series through superior sailing but we had kept it respectable. and won a light air day. 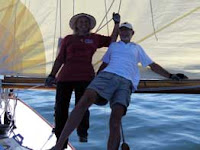 Sadly the series with Kathleen had come to an end. Sadly because the sportsmanship and competitiveness had been high and the fact that two sizable cats had been racing caught considerable notice. I can only hope this bodes well for serious cat boat racing in New England waters, they certainly have the history for it and there seems to be interest. It would be a great thing to see another big cat built to race there regularly, carrying on in the spirit of Hanley and the Crosbys. It wasn't just about work back in the day after all. We have the pictures to prove it.

Photos by Wendy Byar except the one she is in. I have no idea who took that one.
Posted by John Brady at 7:08 PM