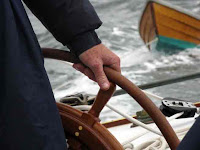 We had allowed three days for the run from Melville, RI to Greenwich, CT. but we would wind up doing it in two. After a reach down the Narraganset, a beat to Point Judith and a slog across Block Island Sound we entered the Race. We would spend the first night in Mystic, finding the harbor on Fisher's Island too exposed to a southerly breeze. 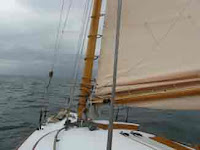 Consulting the weather liars  that night we expected a low to move in the next night and kick up a gale lasting into the next day. By the way there was also a slight chance of thunderstorms. Not wanting to deal with a gale we got up with the sun and started motoring down the Sound. We would cram a two day leisurely cruise into one long day.  By lunch time the breeze was up and we spent the afternoon close reaching toward Greenwich clocking between 5 and 7 knots with two reefs in. Late in the afternoon the overcast sky was decidedly darker over the Connecticut shore but not in a spectacular way.  Time to consult the Sirius weather oracle that comes with our GPS. Sometime during our wonderful sail the slight chance of a thunderstorm had become a sharp certainty. We continued towards Greenwich wondering if the squall would get there first. It would. The map couldn't cram more lightening bolts into the patch of green yellow and red representing the squall. The wind numbers were a little scary too. 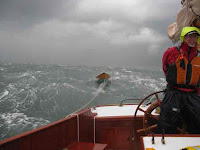 We set about securing the boat. The sail was furled and the lines all secured as we motored into a darker and darker cloud. The crew had been in foul weather gear for some time. There were flashes of lightening in the distance. There would be no running from this one. Considering how many miles Maid had sailed over the summer she was overdue for a thunder squall and here it was. The weather liars did tell the truth about the wind speeds in this one and as it swept in I decided a port on the Long Island shore would be better; allowing us to motor into he building wind and sea towards the lee of the island. Huntington Harbor became the new destination. The fisherman anchor was readied for use if we should need it. Lightening flashed and thunder crashed right with it. The rain really stung now. The techy, expensive, and presumably accurate wind instruments topped out at 50 knots of breeze. It was good to have the sail down and the motor chugging in all of that. At maximum RPM s we were making two knots into the breeze.

After a while the wind dropped to a sedate 35 knots. Patches of blue sky appeared over Greenwich. Soon we would resume our course to the original destination. The gale never happened.


Photos by Wendy Byar.
Posted by John Brady at 5:46 PM