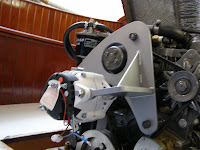 There is progress to report on all fronts. Thanks to Erik Carlsen the new 24 volt altenator bracket is mounted on the engine. The problem solved there was the bracket that came with the engine would require an engine box that was much to wide. we didn't mind a little extra length though so a new bracket was designed and fabricated. Next season we can charge the house batteries with the engine as well as shorepower thus gaining a bit more independence. 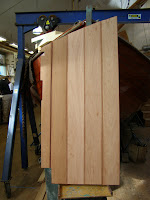 Accommodating all the electronic stuff has been a challenge, but I think we're through that as well.  We made a false bulkhead to go in the head compartment 4 inches aft of the actual bulkhead. The space between them provides room for a raft of stuff, Okam processor for the wind instruments, wire chases for the laptop and GPS. space for the 24 volt battery charger and for a 24 volt to 12 volt converter. We'll need good ventilation between those bulkheads.  The laptop table is nearly done, when folded up against the bulkhead it becomes a picture frame. Another frame above it hides the GPS screen.  The head got a little smaller but the boat has preserved her character. Apparently we have a lot to hide. Is this how people preserve their character?