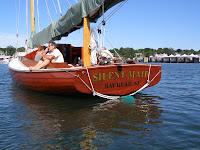 There is a good bit to catch up with. While I was in Philadelphia Silent Maid raced in a New York Yacht Club event. Midway through that, off the rocks at Beavertail, the steering quadrant broke, the arms snapped cleanly. There was a short drill, fortunately the boat was pointed away from the rocks, and with the motor on she moved directly into the wind until a launch gave her a tow. It was clearly time to take the development of the emergency steering gear a step further. 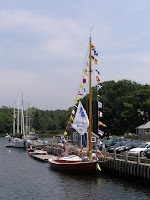 When the rudder was built provision was made for the attachment of a pair of tackles to an eye in the top. Now a pair of pennants could be made up to lead from the aft cleats around to a fair lead on the transom where a tackle could be set up on each side. These could be kept on deck at the ready and attached to the rudder with a snap shackle if needed. Very quickly. At rest they are a great way to keep the rudder centered with no strain on the steering gear at all. A new quadrant was readily available and by the week's end the boat was ready to go once more with the crew a little more willing to reef when the boat starts saying to, even in a race. Next winter we will take a second look at the engineering of that system.

Now that we could steer again we set sail for Woods Hole where the Historical Museum was hosting us. Once again the hospitality we experienced was wonderful. Woods Hole is quite a unique community with oceanography at the center of it. What a great place for dinnertime conversation I. Saturday night after giving a talk about Jersey Catboats at the library we were invited to dinner with 15 other people  I felt like I was walking in the foot steps of some great sailors, Slocum and  Hiscock come to mind, sailing and giving talks for my dinner. Sunday we set sail three times with members of the museum on board, the breeze was good and the company better but we were sure tired by the end of the day. 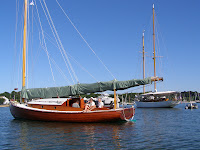 At this writing Silent maid is on a mooring in Vineyard Haven's inner harbor surrounded by schooners. Rowing around this harbor one gets the impression wooden boats are doing quite well in New England. Half the boats in this crowded harbor are impeccably maintained wooden boats. We are on a mooring off Gannon and Benjamin's shop where something interesting is always happening. Being here one gets the feeling Silent Maid has made the "A" list of our little world.