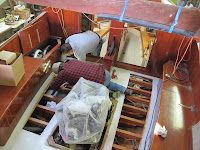 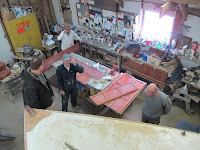 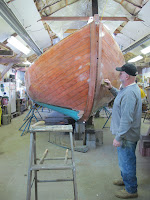 Workshop on the Water was so named because the first shop was housed on a retired lighter barge. Now in the depths of winter with better than a foot of snow on the ground and ice falling from the sky we are happy to be in a shop next to the water rather than on it, one with central heat rather than a pot belly stove. There is no nostalgia for those days. Even then I was not prone to spend my winters thinking of sailing in sunnier climes; there was always a boat to be built. Last years boat had taught its lessons and the shop crew was always ready for next years project; it is that way still. This tempers an eagerness for spring, that season may bring warmth and sailing but it also brings deadlines.  Silent Maid is now under the care of Beaton's with Henry Colie adding to the work list. A few pictures of what they are up to are above this text. The Workshop on the Water is moving onto other things as we near the end of the original Silent Maid's conservation, restoring a runabout and building a new whaleboat for the Morgan. 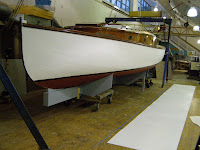 Work is done on the original Silent Maid. She looks great, belying her actual condition. Unfortunately the museum is not ready to show her so as soon as the winter weather permits she will be transferred to our warehouse until the museum is ready. In the meantime anyone who wants to see her should come by the shop. 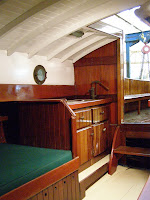 The best we could do for the old girl was support her from the outside with a cradle designed to hold her together. This consists of a substantial laminated beam beneath her keel and plywood poppets bolted to this to support her bilges. Now when she is lifted to be moved all of the stress is on this structure and hull no longer wrinkles the seam compound or attempts to spit out the caulking. She is a boat full of character as befits a vessel of her age. Her worn out frame still carries the tales of numerous owners, races and voyages. To sit in her cabin is to surround oneself with history, not necessarilly of the grandiose kind, no great sea battles or grand discoveries here, but of a simpler more day to day variety. 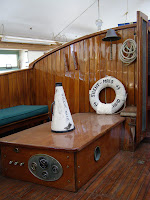 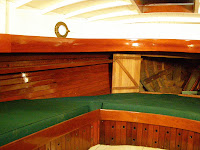 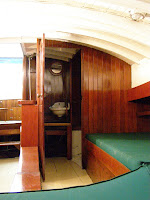 Kent Mountford, one time chronicler of Barnegat Bay's history is currently putting together a book about Silent Maid, I'm sure it will delve into all of these stories and illustrate the importance of this old boat. In the meantime check out his "Closed Sea" for a study of  Silent Maid's home waters.
Posted by John Brady at 8:28 AM